Remembering to never forget.
Posted by s33me at 1:32 AM No comments:

I plugged in the TP-Link TL-WN722N wifi adapter and got no blinking light on the adapter. Figuring it was a problem with my Android build, I started playing around with flashing different images in different ways, which eventually resulted in an unresponsive tablet, both on the touch screen and eventually not moving past the Google Logo after power on. 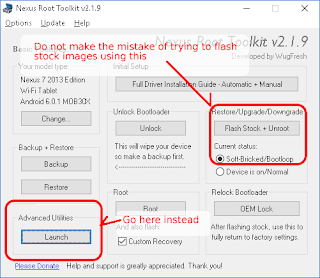 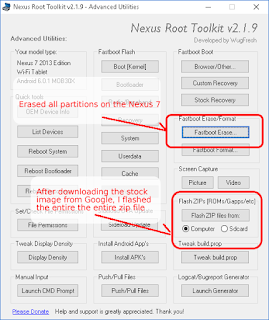 Voila, the tablet booted into the familiar interface; however, since things never go smoothly, the auto rotate no longer worked. Therefore I uninstalled all unnecessary apps, pressed gently on the N and S letters on the backside logo, turned auto rotate on and off several times, powered down the device several times, and twirled around in a counter clockwise circle while chanting the F word. Eventually auto rotate mysteriously started working.

The next issue was all the space taken up by the sdCard/!ReadytoFlash folder created by NRT. In order to delete the unnecessary zip files, I rebooted into the TWRP recovery and used its file manager to delete.

After all this, the USB adapter with a TP-Link TL-WN722N antenna is still not recognized by the Marshmallow tablet.

Stay tuned, I will be back to report what magical sequence of spells are required to make it work. 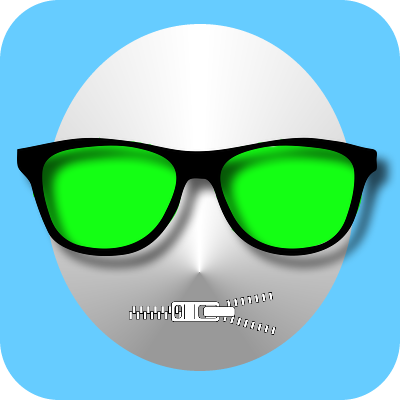